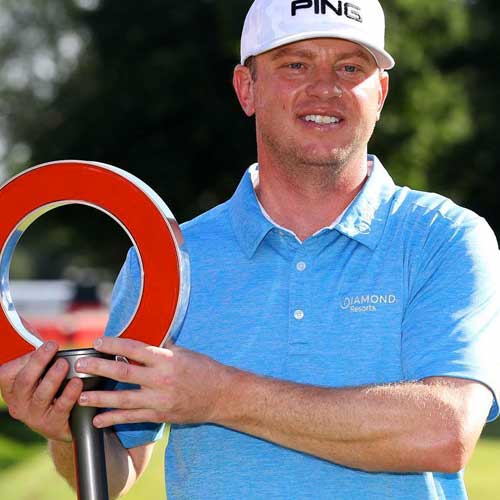 Nate Lashley is one of the most resilient golfers on the PGA Tour, having his remarkable life story culminate with his first win in the 2019 Rocket Mortgage Classic.

Born in Nebraska, Nate played college golf at the University of Arizona and Turned professional after graduating in 2005. He played on the Nationwide Tour (now Korn Ferry Tour) in 2006 and spent the next several years playing mini-tours and selling real estate before qualifying for the PGA Tour Latinoamérica in 2015.He finished 8th on the money list in 2015 with five top-10 finishes. In 2016, he won three events, led the money list and won the Player of the Year award. His placement on the money list earned him a Web.com Tour card for 2017.

On the Web.com Tour in 2017,Nate won the Corales Puntacana Resort and Club Championship and finished 11th on the money list to earn his PGA Tour card for 2018. In 2018, he made eight cuts in 17 events before a knee injury ended his season. He started the 2019 PGA Tour on a minor medical extension, but did not fully meet the terms and spent that part of the season playing out of the 126-150 category.

In June 2019, Nate earned his first PGA Tour win at the 2019 Rocket Mortgage Classic in dramatic fashion. Nate failed to Monday qualify for the event, but gained entry as the third alternate and final man in the field. He shot 63-67-63-70 to win by six strokes, earned $1,314,000 with the victory, and also earned entry into the 2019 Open Championship and the Players Championship, the Masters Tournament and the Sentry Tournament of Champions in 2020.

Nate calls Phoenix, AZ his home and is one of the most engaging and well-liked members of the Tour.
Return To Client Listings